It is with great joy that the Honors Committee of Guthrie Memorial Library announces its ninth annual Honors recipient, Louis T. Guthrie. 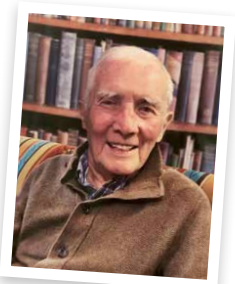 Lou grew up in Williamsport, PA where he graduated from St. Joseph High School. He enlisted in the US Marine Corps during WWII in the Pacific Theater engaging in combat operations in Okinawa. After the war, he attended Penn State University and received his B.S. in Psychology and was a letterman and varsity boxer. After college he worked in Washington D.C. for the CIA and attended George Washington University Law School in 1958 and received his Juris Doctorate. He also served on Law Review.

While attending Penn State, Lou met Nancy (Erb) Guthrie, a native of Hanover. They later married and moved to Hanover where Lou began the practice of law and raised a family. Although this marriage later ended, they remained friends throughout Lou’s life.

Lou was a partner in the Law Firm of Guthrie, Nonemaker, Guthrie, Yingst & Hart, and worked as a lawyer from 1960-2002. He was a member of many organizations including Hanover Elks Lodge, Spring Grove Lions Club and American Legion, Hanover VFW, Hanover Country Club, and Arcadian Club. He served on the Boards of the former Farmer’s Bank & Trust, Hanover Hospital, and was a Penn Township Solicitor. Also, Lou participated in various sporting events including sailing, running, and golfing.

Lou passed away on February 26, 2020, at the age of 93. He enjoyed a long-time relationship with his loving companion Joan Belt. He is also survived by his children, Daniel, Stephen and his wife Barbara and their son Sam, Susan Doran and her husband Rex, and Matthew, his former wife, Nancy Guthrie, and a sister, Mary Byrne.

Guthrie Memorial Library has had the distinct privilege of being the recipient of Lou’s strong support for many years. Lou was an avid reader and proud supporter of our library. Libraries were important to him in his youth, as his family had little money, and he relied on libraries for access to books which he would not otherwise have had. Lou felt that everyone should have access to a library and took action to help continue to make this possible in his community. He could be frequently seen visiting the library, which now bears his name.

A key component of the Guthrie Honors event is to raise funds to continue providing valuable services, books, and programs to the community. Selected books are plated in the Honoree’s name.

Contributions to the Honors Fund are welcome anytime by donating securely online (click on “Honors Event”) or by mail to the Guthrie Memorial Library Honors Fund, Guthrie Memorial Library, 2 Library Place, Hanover PA 17331. Please make all checks payable to the Hanover Public Library Association, as this is the organization that stewards our endowment and holds honors and other perpetual funds.

The Guthrie Library Honors Committee is comprised of representatives from the Board of Directors, Staff, and Friends of the Library. Committee Members include: