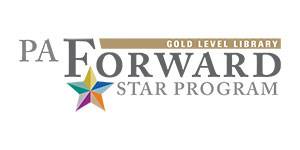 According to Pennsylvania Library Association Executive Director Christi Buker, the PA Forward Star Library program recognizes libraries who clearly demonstrate their integration of PA Forward’s five key literacies – Basic, Information, Civic & Social, Health, and Financial – into library programming.  “By doing this, libraries are making an investment in their communities by assisting all residents in enhancing their overall quality of life,” says Christi Buker.  Martin Library joins 60 libraries across the state who have achieved gold star recognition.  Several libraries in York County are currently at the bronze and silver star achievement levels.

“Our library staff is honored to receive this award because it emphasizes how important it is to be educating people on different topics” says Martin Library Director Mina Edmondson.  “It helps to focus our programming around the five literacies and helps to explain to the public what we do.”

According to Mina Edmondson, Martin Library’s Adult Services Librarian Sarah Fretz learned of the PA Forward Star program at the Pennsylvania Library Association Annual Conference and set out to accomplish all of the goals and surprise her with the achievement.

During the awards ceremony, PA Forward Project Manager Brandi Hunter-Davenport addressed the staff gathered saying, “We are all moving ‘Pennsylvania Forward’ and that star demonstrates that forward movement.  The PA Forward Gold Star Award recognizes your intentional investment in quality programs in York County and how they add to the collective investments in the residents of Pennsylvania.”

City of York Mayor Michael Helfrich thanked the staff of Martin Library and York County Libraries for their work.   “It is easy to just think about the books that are in the library, but Martin Library does so much more,” says  Mayor Helfrich, referencing the library’s outreach into other literacy issues that hold back some of the citizens of the City of York and York County.

According to the Mayor, many people, when their parents pass away might inherit something. However, in the City of York, many people inherit debt.   “That’s how it works because of generations of impoverishment, of unemployment, but also because of the lack of planning, of financial literacy. That’s the system we need help working out of,” he explains.  “This opened my eyes – to things that are not well-publicized about the library – to how much you are changing lives in the city.”