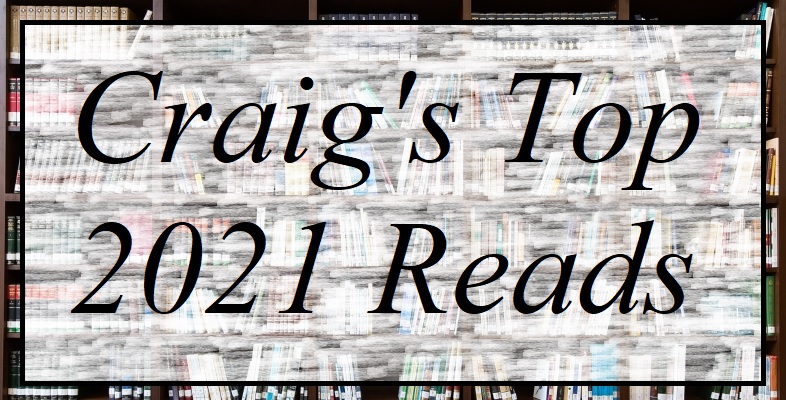 I usually read about 200 books per year. If that number sounds high, consider that I don’t do much else. Reading is life is reading. Last year I was a little slower than usual and the number lands at about 150. With those sorts of numbers, a book needs to be especially good to stand out from the crowd. Here are a few of those standouts from 2021.

1. Fuzz by Mary Roach. Roach has written several science related books, but don’t let that intimidate you. Yes, you will be informed. Yes, you will be smarter. However, you will mostly laugh. In this book, she tackles the world of outlaw animals. If that does not sound like a thing, then you most definitely need to read this book. It is part of her method, looking at an aspect of science from an unusual perspective.

2. The Bomber Mafia by Malcolm Gladwell. Like Roach, Gladwell writes popular explanations of sometimes difficult science. Also, like Roach, I can eagerly recommend all this writer’s books. The Bomber Mafia blends a story of technological innovation with military history. As the title make clear, the technology is that bombers, specifically World War Two era bombers. The military aspect of the story is a debate on how best to apply that technology. If you are a fan of history, it will come as no surprise that the debate has echoes in modern times.

3. The Turnout by Megan Abbott. I am an unapologetic fan of hard-boiled noir fiction. You know the stuff: touch-talking fedora-wearing detectives, and chain-smoking femme fatales. Also, ballerinas. Um, what? Well, Megan Abbot is a leading example that the male world of noir does not need to be male. Here, she takes some of the darkest aspects of noir and applies them to a dance studio. When I say, “darkest aspects”, consider it fair warning. The psychology is grim, thrilling but grim. Previously, Abbott did the same thing with the world of cheerleading in her book Dare Me, also recommended.

4. The Dortmunder Series by Donald Westlake. Westlake is another writer of the hardest of hardboiled fiction. This series is not that, not at all. Dortmunder is the name of a hapless thief starring in 14 comedic crime novels. In the first one, he is forced to steal the same jewel over and over again under circumstances that are increasingly absurd at each turn. In another, he tries to recover loot that was buried years ago, a scheme complicated by the construction of a dam putting the treasure at the bottom of a lake. In my favorite escapade, construction moves a bank into a mobile trailer, so Dortmunder intends to steal the entire bank. I read the entire series last year as well as a volume of Dortmunder short stories and a novella tucked away in a relatively obscure anthology. Once you get started, you’ll want to read all of them as well.

5. The Slough House series by Mick Herron. Speaking of a comedic series, this one must be the number one highlight of my 2021 reading. Herron has an ingenious premise. Not all spies can be James Bond or Jason Bourne. Most will be average; a few will be below average. Some will have destroyed their careers in spectacular fashion. This last group is Herron’s focus. What can you do with incompetent spies who, after all, still know plenty of state secrets despite their blunders? In the Slough House series, you pack them into a decrepit wreck of a building and bury them in soul-killing routine chores. Ah, but they have a colorful boss – one of the great characters in all of espionage fiction – who finds ways to get them embroiled in affairs well above their lowly status. There are seven books in the series, and I breathlessly await the eighth one due in May of 2022. It will no doubt be in next year’s list of best books.