Libraries I have Known 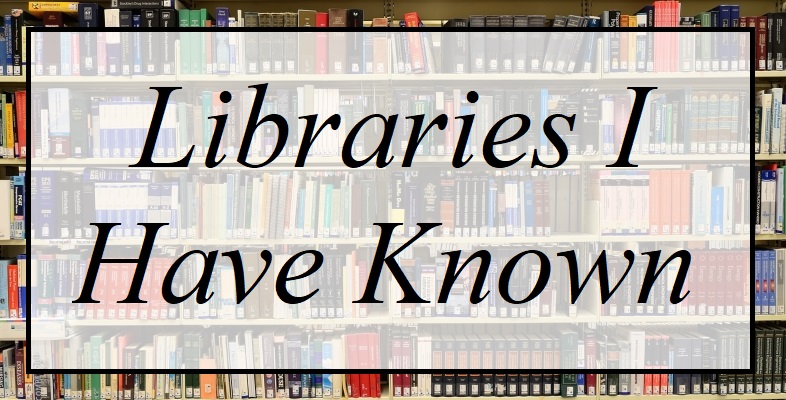 In my almost sixty years (I know! And barely look a day over 105!) I’ve seen a good share of the world. It is not that I am an expert on cruises or a frequent flyer jet set type. Rather, I’ve allowed my working life to take me hither and yon, earning my travels through honest labor. Well, often teaching, but other than that plenty of honest labor.

No matter where I’ve been, either geographically or chronologically, books have always been a major part of my life. Therefore, I’ve known an awful lot of libraries. I am not going to remember them all here. Indeed, if I could remember them all, the list would be too long to publish. Consider this: I’ve taught and/or studied at nearly 50 colleges and universities – each with a library and a few with more than one.

Yes, more than one! My undergraduate school, Gustavus-Adolphus College in Saint Peter MN, had the expected 3 floors of books, journals and government documents. In addition, the geography department had a small library devoted to maps. For those younger than 25 years of age, a map is a paper copy of your phone’s GPS system. The music department had a large library of LP records. For those younger than 25 years of age, an LP record is Spotify imprinted on a vinyl disc or, in the case of a library, tens of thousands of vinyl discs.

From Gustavus, I moved on to graduate school at the University of Nevada, Las Vegas. The library I used in those days no longer exists. I have never returned to see the new one which, I am told, has some sort of robotic retrieval system. You tell the online catalog what you want, and a robot gets it for you. In contrast, the library I used back then had journals (themselves now digitized into oblivion) stacked on moveable shelves. The shelves rested on what looked like railroad tracks; they had a hand crank for putting them in motion. In theory, a student could have got squished between two very heavy rows of these journals, but that would have to be a very slow-moving student.

One of my very first teaching jobs out of college was for Wright College, one of the City Colleges of Chicago. The library here was rather hard to use. You see, they decided to place it inside a pyramid.

Yes, it looks fantastic from the outside. Another yes: it is very neat to stand inside this building and simply gawk at how it is laid out. However, when it comes to the nuts and bolts of using it, the neatness wears away rather quickly. To identify one obvious problem: none of the levels can be the same size. The bottom floor is much bigger than the top floor, and the collection needs to be spread throughout these uneven spaces. When you get to the end of a row, it is not always obvious where the next row starts.

Most libraries do not even try to get this fancy, at least in my experience. A few, however, really go the extra mile. Perhaps the fanciest one I’ve used was overseas at The American University of Sharjah. This dome fortress had marble stairs, a dome covering a three-story atrium, and front doors that were at least fifteen feet tall.

Amazingly, this was not the only library near me at the time. AUS was part of a larger location called University City, home to four other colleges and a public library. I did manage to visit the public library shortly after construction, but the shelves were mostly empty. It felt more like an enormous museum waiting for exhibits to be installed.

For the most part, my teaching career took place in community colleges and those libraries are usually modest affairs, built on a strict budget and very much looking the part of a standardized institutional structure. They are cement and steel boxes that hold books. In fact, as I review them in my memory, quite a few of them are nearly impossible to visualize.

Indeed, they sometimes were painfully aware of how little visual interest they offered. Perhaps the worst, and I will purposely withhold the name, was forced to use a basic color scheme when painting the walls otherwise there would be not a single visual clue as to where you were. Hence the ground floor was painted brown (the color of ground) and the top floor blue (sky color) with green being the middle floor because there is nothing like prison wall green to remind one of the trees.

Public libraries are even more of a mixed bag. In larger cities, you can find true wonders, remnants of a time when cities built to impress. It has been ages since I’ve visited one of these monuments but, at different times, I was a fan of the Enoch Pratt Library in Baltimore and the Harold Washington Library in Chicago. The Harold Washington has these enormous owl sculptures (yes, enormous owls!) perched on the roof –try an image search if you don’t believe it. I have the vaguest memory of one visit to the New York Public Library, a reading room with library tables having significantly greater square footage that some apartments I’ve rented.

In smaller villages you can, on the other hand, find all sorts of buildings that were not purpose-built as libraries. Old schools are a popular choice. I can think of at least three in central PA plus one public library that is an active high school. The Dillsburg Area Public Library was once in an old home and now uses a building that was once a doctor’s office. I can name at least one Central PA public library that still uses a house.

Any fan of libraries should, at some point in life, pay a visit to a Carnegie Library. Steel baron Andrew Carnegie paid for libraries by the hundreds. We have a few in Pennsylvania although not necessarily close to Dillsburg. Bucknell University has an academic version of a Carnegie but his public efforts are more numerous. I encountered my lone example in Kendal, a small town just North of Lancaster England where I live in the mid-1990s. For what is essentially a village library it, shall we say, substantial, more like an old-timey bank than a home for books.

Then, of course, you have libraries that aren’t really libraries at all. In many ways, these are my favorites. You find them in nearly any sort of random location: cruise ships, cabins, hotels, diners. They consist of a few shelves and chaotically stacked books with no sense of order, organization, or arrangement. There’s one rule: if you take a book, leave a book. You can and often do get the biggest surprises from these collections.