Black Voices in Sci-fi and Fantasy 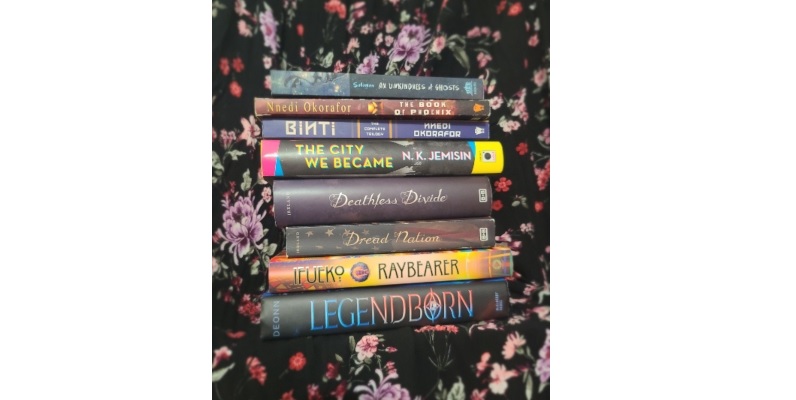 Excitement and adventure are what the vast genres of Science Fiction, Fantasy and Speculative Fiction offer, but they also provide hope for countless marginalized communities by offering imaginary worlds and alternate realities where quite literally anything can happen. A few legends of the field -we praise them for their work every day but specifically in honor of Black History Month- are Octavia Butler and Samuel R. Delany. Even the leading literary powerhouses like Zora Neale Hurston and W.E.B. Dubois have dipped their toes in the electrifying water of fantastical stories.

Some say that escapism is one of the most alluring aspects of these three genres. Imagining places with different rules or no rules at all. Well, I can see the appeal and it undoubtedly influences who its readers and creators are.  The flip side of that coin, however, is these fantastical situations and environments can provide unique lenses through which we can understand complicated and downright horrible aspects of humanity.

For Black Americans this means we can experience worlds where the enslaved are time travelers or zombie hunters or space engineer nurses who guide a humanity-saving ship back to Earth. One of Octavia Butler’s short stories, “Bloodchild” (to read it check out The Norton Anthology of African American Literature) has such a powerful, horrific and futuristic way of challenging our society’s traditional ways of thinking about race and gender. She is my personal favorite and there are many works for me to suggest like Kindred (this is where you can find that time travelling enslaved person) or Parable of the Sower (eerily like the world we live in today), but so many people have been advancing this field.

All of this to say that Black authors are leading in this field, so move over GOATS and legends… I’m here to introduce you to the leaders of the field today.

Without further ado, here’s an extremely short list of my recent favorite reads that Black authors have contributed:

Stretching these genres past their current limitations is Nnedi Okorafor who has created an entire genre in order to more aptly define her work. Go ahead and read The Book of Phoenix and you’ll see why she coined the term Africanfuturism (not to be confused with Afrofuturism). The book is such an epic tale but a quick read. The plot is about a woman with extremely powerful gifts of fire who is forced to be nothing more than a lab rat for futuristic government scientists, but if you read it you’ll find she won’t let it stay that way, and maybe she’ll get to free her friends too. Also check out Binti.

From the modern perspective, I suggest two of my recent favorites. The first of which offers many different perspectives from the Black diaspora and is considered more of a speculative fiction. The City We Became by N. K. Jemisin is an exercise in diversity… and fighting spectral beings and their pet monsters invading from an alternate dimension. Cities are living entities. They are composed of its people, buildings, parks, and roads, and the defining part of what makes a city is its avatar. Each borough in New York, and their respective avatars, must defeat some ethereal creatures that threaten the city’s life. They’ll have to learn how to put their differences aside so they can discover the city they can become together. If they don’t, NYC will be no more. Also, read the Broken Earth series which made N.K. Jemisin the first author to win A Hugo award three years in a row for each book in a series – it starts with The Fifth Season.

The second suggestion I have for a reader that desires a modern setting is of the fantasy persuasion. Legendborn by Tracy Deonn is inspired by the King Author legends, a Black girl is thrown into a modern version of the epic tales. Bree deals with generational trauma, grieving the death of her mother, and participating in trials that will determine if she will be bound to a sexist, racist organization until death. Parts had me devilishly intrigued while others had me whimpering. By the end I was cheering and laughing. This is also the first book in a series, but we’ll have to wait until later this year to get the second one.

Next, I’ll move back in time to a world where a pandemic of zombies brought the Civil War to a halt. In Dread Nation (and the sequel Deathless Divide) zombies rule, but instead of chattel slavery, the Black characters are forced into zombie-slashing warriorhood. It’s scary and intense with a healthy sprinkle of perspective on colorism and sexism and friendship. I am currently reading one of Justina Ireland’s current works Promise of Shadows, which is a dark comedic take on Greek mythology.

I’ve saved my personal favorite for the very end. This one hops forward into the future of our world (unconfirmed by the author as far as I can tell). An Unkindness of Ghosts is a literary masterpiece about a spaceship carrying the last of humankind, a person who decides their mother had important secrets, and a caste system based largely off capitalist privilege and skin color. Nary a shortage of metaphors and symbolism to pick through. The characters in this book are wondrously flawed heroes and terrifying damsels. The ending satisfies the soul while keeping the heart yearning for more.

Okay, fine. You’ve convinced me. I’ll add one more that I just so happened to finish reading recently enough to include here. Raybearer, by Jordan Ifueko stole my heart. It has everything a reader could want. It’s got action, it’s got a little creepy suspenseful part thrown in there, its got mindreading and a life or death mission that will define the destiny of our main character and everyone else around her, and of course heartbreak and romance. This book has everything, including an afro right there on the cover, which makes it an ideal choice for you to grab at the Dillsburg Library in honor of Black History Month.