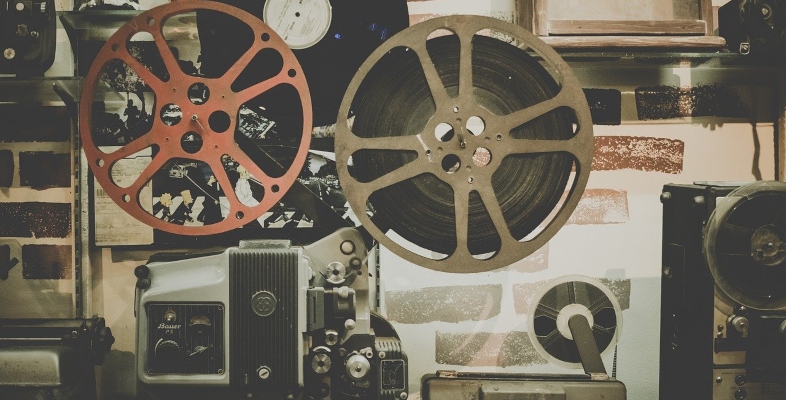 If you ever find yourself in the library, staring at the shelves of DVDs and unsure of what you might want to watch. Please ask me. I am an expert, a genuine published movie critic. I was not one for long, mind you, but here’s the story about one of my many, oh so many, temporary careers.

I am and always have been a cinema lover. Note my choice of word there: “cinema”. I did not say “film” or “movie”. To put it another way, I am a movie snob. I love the old films, the artsy films, the foreign language films that require speed reading of often poorly translated subtitles. If it is difficult and obscure, I eat it up.

I am not bragging, mind you. I understand it is a character flaw. Worse, however, is the urge to tell other people about these movies when, let’s face it, they really don’t want my opinion. Oh, I could offer an opinion, and most certainly tried many a time, but I get shut down with a curt “It is only a movie.”

Well, through a bizarre string of circumstances I found a job that supported my film snob hobby.

I was living and working in The Marshall Islands, teaching English at The College of the Marshall Islands. The Marshalls are what is sometimes described as a “developing nation,” though one must be aware that the phrase is a loaded one and not to everyone’s taste. In real terms, whether it is to everyone’ taste or not, the nation simply did not have the Western amenities that we expect as Americans.

It is a small place, both geographically and in terms of population. It is about as isolated as you can imagine, sitting just about smack dab in the middle of the Pacific Ocean. The plane stopped twice a week. Sometimes it brought much needed supplies, other times not so much. True story: I once broke a shoelace and could not find a replacement anywhere at all on the island.

But we had movies. And we had a newspaper. When I got my critic gig, we had two newspapers in fact. The main newspaper was called The Marshall Islands Journal, but I worked for the Journal’s challenger, The Island Voice.

The Island Voice was a sort of hobby for a spouse of a well-off medical professional. She was not shy about spending money, either. (Yes, I am avoiding proper names for reasons that will become apparent.) The Voice was in color and printed at a fancy press off island. The Journal was a black and white number printed locally on antique machines. The Journal had a team of old hands working for it, rugged ex-pats who looked and acted like reporters from central casting: rough around the edges, we will say. The Voice recruited its talent from the college.

I was hired as movie critic because I had the single best qualification: I asked for it. Truth be told, I invented the job then asked for it since The Island Voice was not going to have an entertainment column until I convinced them that I would be worth every penny of my salary. That would be zero, if you have not guessed.

I started by reviewing The King’s Speech. It had won the Oscar for Best Picture earlier in the year so was a perfect starting point for a film snob. I didn’t like it all that much. I followed with Black Swan, a movie that had been nominated for the same award. I loved it.

After those two were published, I got into a rhythm and started writing two or three a week. I could do this because, irony upon irony, I was a movie critic in a country that did not have a movie theater. Instead, I used what I am pretty sure were bootlegged DVD copies brought in from Hawaii. I am not proud of this. After all, as a librarian I consider the rights to intellectual property sacred. For that matter, I am a writer myself and consider the rights to my own works sacred.

The thing is, it was just not possible to honor those rights in The Marshall Islands. If you simply turned on the TV, you were violating them. The local cable company, and I use the term loosely, would regularly bring in tapes of network shows from Hawaii, roughly two weeks’ worth at a time. The company would then simply play the tapes over the air until the next shipment.

Another true story: a neighbor of mine was late coming home from a church function. He was a little irritated because there was show he wanted to see, and he had missed it. He called the TV station and asked them to restart the tape. Imagine! Can you call CBS and request a mulligan? Of course not! The nerve. Our station restarted the tape for my neighbor.

Through dubious DVDs and equally dubious televised movies, I was keeping myself busy. The Island Voice published at least one of these per week, often two, and would occasionally include a side column on any random subject of my choice. I was especially proud of an op-ed about the local mistreatment of dogs.

I was writing more than my paper could print. It only came out once a week. I was writing three to five items for each edition when they needed two at most. Still, this was not my first newspaper job and I knew that editors liked to have some content in the bank, something ready to go when they needed to fill a few column inches.

I looked into becoming an official card-carrying critic. There are such things via various societies and associations. The main requirement, aside from paying the membership dues, was an established record of so much time in the business. If I could produce a year’s worth of columns, I would qualify.

Then one day, The Island Voice vanished. We were waiting for the next edition and it never showed up. In fact, it became a story in the other newspaper. What happened? According to what those reporters discovered, and according to island rumor, complete with all the disclaimers that ought to accompany all rumors, the spouse of my editor, that somewhat well-to-do medical professional, had been running a prescription scam. He ran off with the money, and that money was our paper’s working funds. No more Island Voice.

And no more career as a movie critic. It lasted about six months, if memory serves.

So again, if you need a movie suggestion, just ask. I have about ten years of movie, I mean cinema, opinions, waiting for you