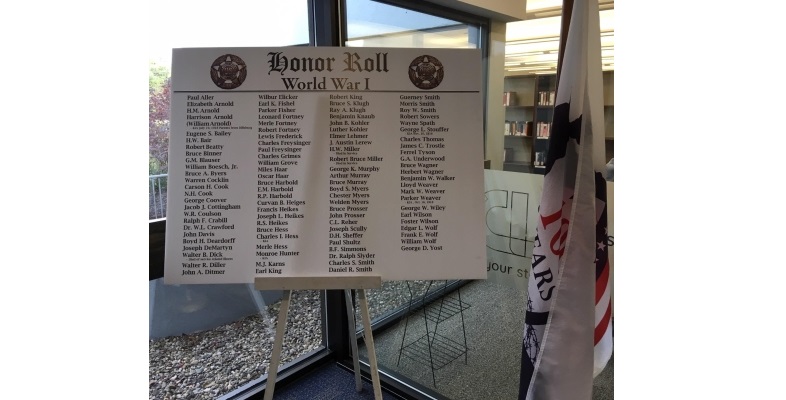 The centennial remembrance of what is often called The Great War recently concluded with appropriate ceremonies around the world. World War I was a horrible time. Innovations such as machine guns, submarines, poison gas, tanks, and airplanes created a new kind of warfare.

It touched all corners of the world, including here in the Dillsburg area. The Library has been fortunate to have had an honor roll of Dillsburg area men and women who took part in The Great War, on loan from NYCHAPS, on display recently in our lobby. Some of those listed on this roll never made it home. We are grateful to them and to all of our nation’s veterans of both war and peace.

Veterans Day falls annually on November 11th because that is the day World War I ended and the guns, proverbially, fell silent. While we honor all of our veterans, November 11th carries the same significance as Memorial Day throughout other parts of the world and is known as Remembrance Day.

If you are interested in learning more about World War I, the Dillsburg Area Public Library has many resources to help you!