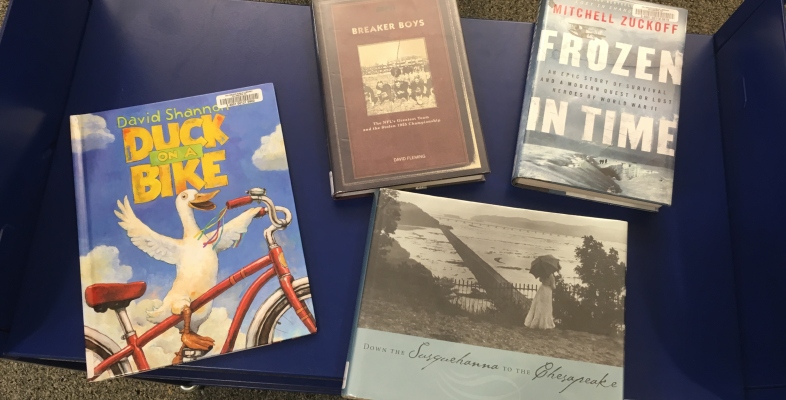 When I was growing up I read a lot of history. I still read mostly history and other non-fiction. I have come to the conclusion over the years that truth is stranger than fiction. I used to read a lot of the Civil War, but that has shift to local history and World War II.

I like to recommend some of my favorite books:

Frozen in Time by Mitch Zuckoff. This is the story of a plane and the attempts to rescue its crew. It is also the modern story of find one of the lost rescue planes on the frozen Greenland icecap.

Breaker Boys by David Fleming. This book is a great underdog story! This one is about a coal country Pennsylvania football team and the NFL championship it won, lost, and has been trying to reclaim since 1925.

Down the Susquehanna to the Chesapeake by Jack Brubaker. There is no more local story than that of the river that defines central Pennsylvania.

Duck on a Bike by David Shannon. It’s about a duck. On a bike.

Duck on a Bike might stand out some from the other titles on this short list, but there is a story how it got on this list. When I started my library career, I was a bookmobile librarian. When its lunch time on a bookmobile, there’s only so much you can do to pass the time. I read a lot of children’s books, include Duck on a Bike. The last page of the book always made me laugh. I actually had a picture of the last page hanging in my office. I’ll let you look up the final page I am referring to, but I will say that there is a sequel called Duck on a Tractor.