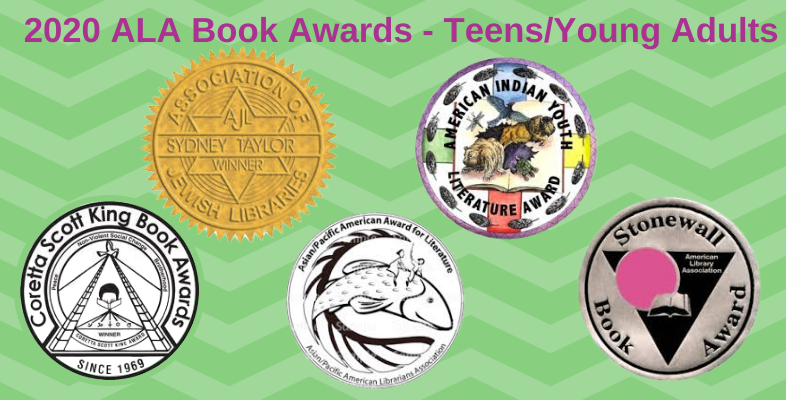 The American Library Association names winners for book awards every January. In 2020, there were so many winners, we’ve had to divide them into 3 different lists: books for Children, for Middle Grades, and for Teens & Young Adults.

Here are the books for Teens & Young Adults which won awards or received honors!
The John Newbery Medal is given for the most outstanding contribution to children’s literature

The Stars and the Blackness Between Them, written by Junauda Petrus

The Coretta Scott King/John Steptoe New Talent Author Award is given to affirm new talent and offer visibility to excellence in writing at the beginning of a career as a published book creator of literature that best exemplifies African American life and culture.

The Michael L. Printz Award is given for excellence in literature written for young adults

Laura Dean Keeps Breaking Up with Me, written by Mariko Tamaki, illustrated by Rosemary Valero-O’Connell
Ordinary Hazards: A Memoir, written by Nikki Grimes

The Silence Between Us, written by Alison Gervais

A Boy and His Dog at the End of the World, by C.A. Fletcher
Do You Dream of Terra-Two? by Temi Oh
Dominicana, by Angie Cruz
Gender Queer: A Memoir, by Maia Kobabe
High School, by Sara Quin and Tegan Quin
In Waves, by AJ Dungo
Middlegame, by Seanan McGuire
The Nickel Boys, by Colson Whitehead
Red, White & Royal Blue by Casey McQuiston
The Swallows, by Lisa Lutz

The Margaret A. Edwards Award is a lifetime achievement in writing for young adults:

WINNER: Steve Sheinkin. His books include: Bomb: The Race to Build-and Steal-the World’s Most Dangerous Weapon; The Port Chicago 50: Disaster, Mutiny, and the Fight for Civil Rights; The Notorious Benedict Arnold: A True Story of Adventure, Heroism, & Treachery; and Lincoln’s Grave Robbers.

WINNER: Hey, Kiddo: How I Lost My Mother, Found My Father, and Dealt with Family Addiction, produced by Scholastic Audiobooks, written by Jarrett J. Krosoczka and narrated by the author, Jeanne Birdsall, Jenna Lamia, Richard Ferrone and a full cast

The William C. Morris Award is given for a debut book published by a first-time author writing for teens

WINNER: The Field Guide to the North American Teenager by Ben Philippe

The Candle and the Flame written by Nafiza Azad
Frankly in Love written by David Yoon
Genesis Begins Again written by Alicia D. Williams
There Will Come a Darkness written by Katy Rose Pool

The Great Nijinsky: God of Dance, written and illustrated by Lynn Curlee
A Light in the Darkness: Janusz Korczak, His Orphans, and the Holocaust, written by Albert Marrin
A Thousand Sisters: The Heroic Airwomen of the Soviet Union in World War II, written by Elizabeth Wein
Torpedoed: The True Story of the World War II Sinking of ‘The Children’s Ship’, written by Deborah Heiligman

WINNER, Young Adult: Someday We Will Fly, by Rachel DeWoskin

Dissenter on the Bench: Ruth Bader Ginsburg’s Life and Work, by Victoria Ortiz
Sick Kids in Love, by Hannah Moskowitz