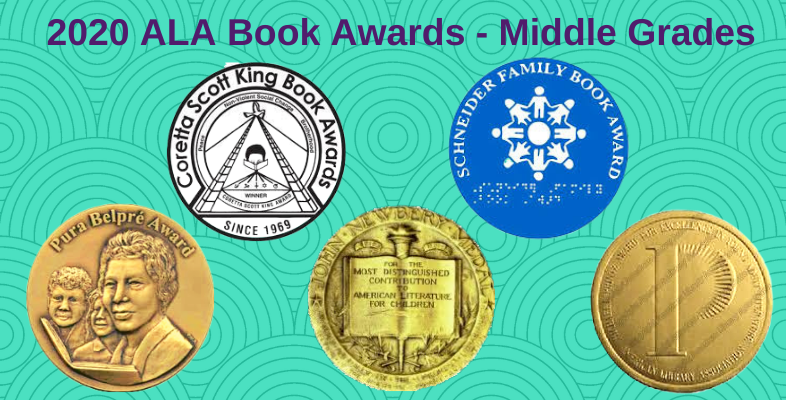 The American Library Association names winners for book awards every January. In 2020, there were so many winners, we’ve had to divide them into 3 different lists: books for Children, for Middle Grades, and for Teens & Young Adults.

Here are the books for middle grades which won awards or received honors:

Tristan Strong Punches a Hole in the Sky, written by Kwame Mbalia
Look Both Ways: A Tale Told in Ten Blocks, written by Jason Reynolds

The Michael L. Printz Award is given for excellence in literature written for young adults

The Beast Player, written by Nahoko Uehashi, translated by Cathy Hirano
Where the World Ends, written by Geraldine McCaughrean

The Margaret A. Edwards Award is a lifetime achievement in writing for young adults:

WINNER: Steve Sheinkin. His books include: Bomb: The Race to Build-and Steal-the World’s Most Dangerous Weapon; The Port Chicago 50: Disaster, Mutiny, and the Fight for Civil Rights; The Notorious Benedict Arnold: A True Story of Adventure, Heroism, & Treachery; and Lincoln’s Grave Robbers.

Lety Out Loud, written by Angela Cervantes
The Other Half of Happy, written by Rebecca Balcárcel

All in a Drop: How Antony van Leeuwenhoek Discovered an Invisible World, written by Lori Alexander, illustrated by Vivien Mildenberger
This Promise of Change: One Girl’s Story in the Fight for School Equality, written by Jo Ann Allen Boyce and Debbie Levy

Anya and the Dragon, by Sofiya Pasternack
Games of Deception: The True Story of the First U.S. Olympic Basketball Team at the 1936 Olympics in Hitler’s Germany, by Andrew Maraniss