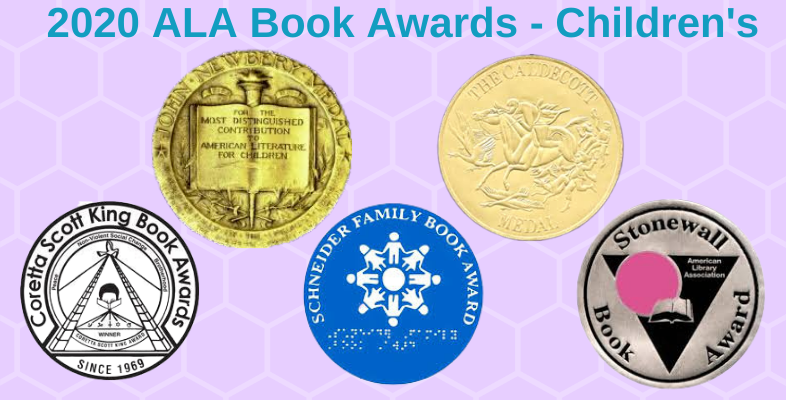 The American Library Association names winners for book awards every January. In 2020, there were so many winners, we’ve had to divide them into 3 different lists: books for Children, for Middle Grades, and for Teens & Young Adults

Here are the books for children which won awards or received honors:

The Undefeated, written by Kwame Alexander and illustrated by Kadir Nelson

The Coretta Scott King/John Steptoe New Talent Illustrator Award is given to affirm new talent and offer visibility to excellence in illustration at the beginning of a career as a published book creator of literature that best exemplifies African American life and culture.

WINNER: What Is Given from the Heart, illustrated by April Harrison, written by Patricia C. McKissack

WINNER, Young Children (age 6-10): Just Ask! Be Different, Be Brave, Be You, written by Sonia Sotomayor, illustrated by Rafael López

A Friend for Henry, written by Jenn Bailey, illustrated by Mika Song

The Children’s Literature Legacy Award honors an author or illustrator whose books, published in the United States, have made a substantial and lasting contribution to literature for children through books that demonstrate integrity and respect for all children’s lives and experiences.

WINNER: Brown, originally published in Norwegian as Brune, the book was written by Håkon Øvreås, illustrated by Øyvind Torseter, and translated by Kari Dickson

When Spring Comes to the DMZ, originally published in Korean, written by Uk-Bae Lee, illustrated by the author, translated from the Korean by Chungyon Won and Aileen Won

WINNER, Picture Book: The Book Rescuer: How a Mensch from Massachusetts Saved Yiddish Literature for Generations to Come, by Sue Macy, illustrated by Stacy Innerst

The Key from Spain: Flory Jagoda and Her Music, by Debbie Levy, illustrated by Sonja Wimmer