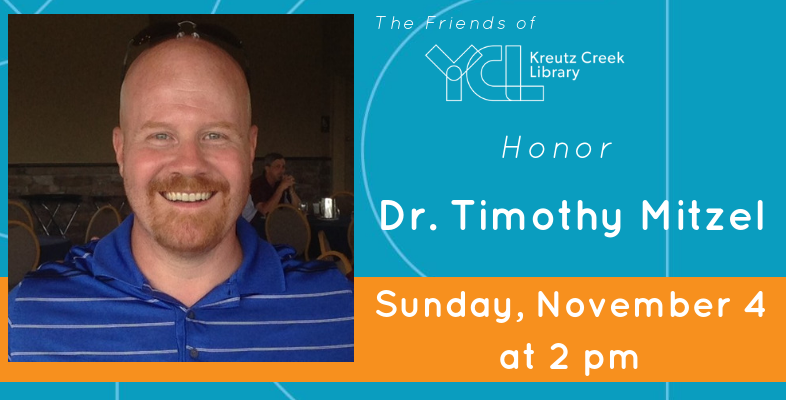 The Friends of Kreutz Creek Library have announced their selection of Dr. Timothy Mitzel as the 2018 Honoree for their inaugural Honors Reception.  They will recognize Mitzel for his outstanding dedication to education and the community during a special ceremony and reception on Sunday, November 4 at 2 p.m. The public is invited to attend the event which will be held at the Eastern York High School in Wrightsville.

Dr. Mitzel grew up in eastern York County, attending Eastern York School District from kindergarten through commencement.  After receiving his B.S. in Elementary Education from Lebanon Valley College, he came back to his roots to teach second grade at Canadochly Elementary School.  He earned his Master’s of Education Degree from Pennsylvania State University. Mitzel went on to earn his Doctorate in Educational Administration from Immaculata University while continuing to lead schools in the Littlestown School District as both Assistant Principal and Principal. In 2010, he rejoined Eastern York School District as the Principal of Kreutz Creek Elementary School. Two years later, he was named the High School Principal at Eastern York where he has been serving the York Community ever since.

The Kreutz Creek Honors ceremony will include commentary by guest speakers who will pay tribute to Dr. Mitzel. Among those speaking at the event will be Dr. Rita Becker, superintendent of Eastern York School District. Their tributes will be followed by a reception.   Anyone interested in attending the November 4th celebration should RSVP by emailing the name of attendees to [email protected]  Kreutz Creek Library, a branch of York County Libraries, is located at 66 Walnut Springs Road in Hellam and has been transforming lives and serving communities since 1979.

A key component of the Kreutz Creek Honors event is to raise funds to continue providing valuable services and programs to the community. Contributions to the Honors Fund are welcome by donating securely online at donate.yorklibraries.org or by mail to the Kreutz Creek Honors, c/o York County Libraries, 159 East Market Street, York, PA 17401.

Some of Our Honoree’s Favorite Books

The Lost World by Michael Crichton

David and Goliath by Malcom Gladwell

The Giving Tree by Shel Silverstein

Alexander and the Terrible, Horrible, No Good, Very Bad Day by Judith Viorst

The Last Lecture by Randy Pausch