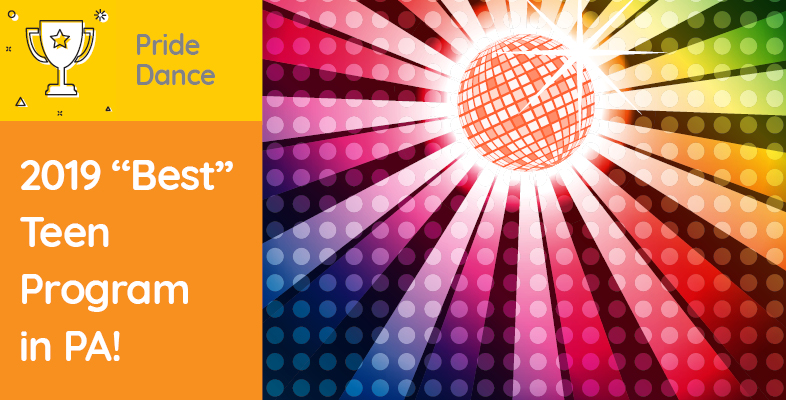 Martin Library is proud to announce that they have won a Pennsylvania Library Association Best Practices Award for High School for the Martin Library Pride Dance. We spoke to teen forum manager Jennifer Johnson about the Pride Dance.

What is the Pride Dance?

It’s a teen-created, teen-led dance where all teens who are LGBTQIA+ or Allies from across York City come together in Martin Library and have a dance in a safe, welcoming environment. However, any teen who wants to attend is welcome. It isn’t during Pride Month, because it would interfere with school. Instead it is set in January, usually on a Saturday night. Some changes were made by the Teen Leadership Committee in 2019 to make the event more accessible, including moving the date to January. The teens decorate, arrange for food, hire a DJ, solicit door prizes, and set up a selfie station and photo booth. The teens are mentored by library staff in planning the event, learning about event planning tactics, considering security needs, figuring out how to source funding, but the actual work is done by the teens.

What makes this program unique?

This is the first 100% teen-led program at Martin Library; the only input from library staff is at the teens’ request, so the teens can draw on their expertise.

What have you learned by running this program?

It’s a surprise every time! The Pride Dance is now going into its third year. The event was modified in year two when the teens added online registration and lowered the admission fee for early registration. New students came to year two; they had expected the same students to come back, but new ones came instead. It was surprising to everyone. Another surprise was that the Martin Library Pride Dance is considered a ‘sponsor’ of York’s Equality Fest, for promoting LGBTQIA+ visibility among youth. So we are thinking year 3 in January 2020 will be interesting!

Any moment/memory that sticks with you?

After the Dance, the teens had a sense of real accomplishment! They learned a lot, especially when some things went wrong. They had to learn how to problem-solve, both in the short term and long term. The teens found it very meaningful to have library support, mentorship, and backing for this potentially controversial event.

What do you want people to understand about the Pride Dance?

The Pride Dance in many ways represents the connectivity the library stands for. Every part of the community is really welcome at library to connect with one another. The Pride Dance shows that welcoming spirit.

How can people support it?

The teens would love donations of prizes, donations of funding, and social support. If the teens come to you looking for donations, please give them the opportunity to be heard.

Do you have a ‘wish list’ to expand the program?

Right now, we need to solidify the method, steps, and overall template for the event. We would like to make it part of a series of different focus groups within the teen population to increase the visibility of those groups and more fully express the Teen voice. This would offer a chance for teens to speak out and show their community their value.