The Pennsylvania Library Association presented Paula Gilbert, director of youth services for York County Libraries, with its highest professional laurel, the “Distinguished Service Award” during its annual conference Tuesday.  The award is presented annually to a librarian who exemplifies exceptional meritorious statewide service to libraries of the Commonwealth and 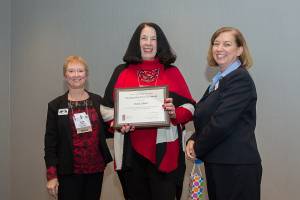 service to the Pennsylvania Library Association.

Paula’s extensive legacy of service includes serving as Chair of the Pennsylvania State Youth Services Task Force where she fostered continuing education opportunities for librarians.  She served as Public Relations Committee Chair for the Pennsylvania Library Association, developing the Pennsylvania Early Learning Forum and the Best Practices awards. She also held the offices of 1st Vice President, President Elect, and President of the Pennsylvania Library Association. Following her year as the association’s president in 2013, Paula has remained actively involved serving as the PA Forward Training Committee Chair.  She held the office of Vice Chair of the PA Forward Steering Committee and is currently serving as Chair.  She also participates on the One Book, Every Young Child Committee for Commonwealth Libraries. 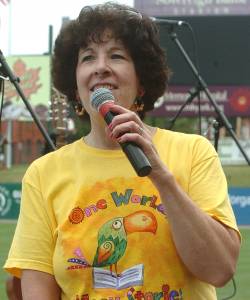 “I am humbled by the recognition I have received from the Pennsylvania library community and my co- workers in York who cared enough to nominate me. The Distinguished Service Award is the highest honor that can be given to a librarian and I am truly honored to be recognized in this way.”  –  Paula Gilbert, York County Libraries Director of Youth Services

Dedication to the Children of York County

Paula’s passion and dedication to the children of York County has led her to be deeply involved in the United Way’s early learning initiative, FOCUS, since 1996.  Her long-standing 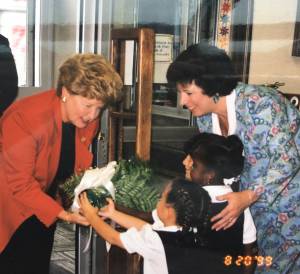 partnership with The School District of the City of York has grown from providing trained library aides to manage the school libraries, to include a Migrant Education Program, summer learning programs at schools, behavior specialists, and the after-school program which provides learning enrichment and support to 800 children daily at the district’s elementary schools.

This champion for children has worked with countless organizations to bring high quality literacy opportunities to children of all ages and has established York County Libraries’ services as some of the best in the region.  Her efforts include GOAL (Grade One At the Library); the initiative to put library cards in the hands of all York County first grade children.  Since the program’s inception, more than 30,000 first graders received library cards, right when they were first learning to read.  Paula also connected York County children and families to LEAP into Science, a STEM initiative from the Franklin Institute.  York was one of 10 national sites originally selected to offer this program, which has since expanded to additional locations.

She has been recognized as a Children’s Champion by the York Area Association for the Education of Young Children, a Hometown Hero by the York Revolution, a Rising Star Hero by the Crispus Attucks Association and a recipient of the MLK Image Award for community improvement by the Black Ministers’ Association of York. Paula is currently serving on the Healthy York County Coalition Leadership Council, the Community Progress Council’s Policy Board for Early Head Start/Head Start, and the Board of Directors of the Pennsylvania Humanities Council.

“Paula’s passion leads the vision of children’s services throughout York County and our Commonwealth. Her achievements and her sustained excellence in youth services 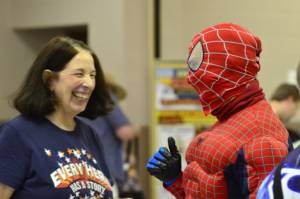 have had a significant impact on York County Libraries and the library profession. Her creativity, innovation, moral courage, and leadership have enhanced the activities and quality of Pennsylvania’s library service to children and youth beyond measure.  I can think of no other person more deserving to be honored by the Pennsylvania Library Association for Distinguished Service than Paula.”  – York County Libraries President Robert F. Lambert.