The Martin Library Honors Committee selected Pete Brubaker as its 2022 Fall Honoree. Pete has served the York community in a variety of roles over the years, and will be recognized in an honors ceremony at Martin Library on November 6, 2022 at 2:00pm. To make a contribution in honor of Pete or register to attend, please click here. 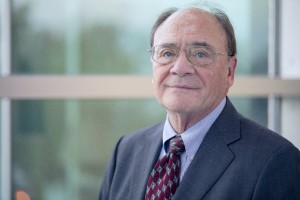 Pete and his wife, Meg, moved to York in 1977 when he accepted a position with the Susquehanna Pfaltzgraff Co. After serving as the Company’s VP Finance/CFO for 15 years, he was named President/CEO of Susquehanna’s Radio, Cable, and Internet Operations in 1995. Pete retired in 2005 and formed Hammer Creek Enterprises, LLC, a private investment company, where he remains Principal.

Pete’s involvement with Martin Library began in 1996 when he was named Board President, a role he held until 1999. He served on the York County Libraries Board from 2015 through 2021. Pete remains active on the YCL Finance Committee and as a Legacy Society member. As an advocate for improving the school readiness of Pennsylvania’s children he was a founding Director of “Focus on Our Future”, and Chairman of the Pennsylvania Partnerships for Children Board. He was also a member of the Pennsylvania Business Community’s Early Care and Education Task Force, the CHIP Advisory Council and the Pre-K Counts Executive Leadership Council. Currently, Pete serves on the Board of the WellSpan Health System. His prior services include: Chairman of the York County Economic Development Corp. and as a Director of Snyder’sLance Inc, United Fiber & Data, LLC, the National Cable & Telecommunications Association, Cable Television Laboratories, the Lancaster Cleft Palate Clinic, the Appell Center for the Performing Arts, and Historic York Inc.

Pete received a BA in Economics from Wesleyan University and an MBA from Harvard Business School. He served four years in the Air Force, including a year in Viet Nam. Pete and Meg have two sons and four grandchildren. Patrick and Jessica live in York with Colin and Sean. Joshua and Jennifer live in Lancaster with Addy and Will.

Pete will be honored at Martin Library on November 6 at 2:00pm, and the event is open for the public to attend. To register for the event, click here.

A key component of the Martin Honors event is to establish a perpetual fund to purchase books in the name of the honoree. Contributions are welcome anytime by donating securely online or by mail to:

If the year of the Honoree’s event is highlighted blue, click the link to view the program from the event.