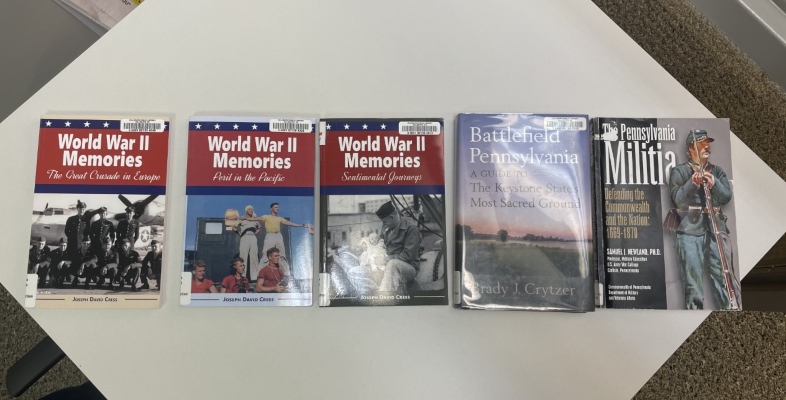 In appreciation and honor of Veteran’s Day, I would recommend the following military history titles that have a more local flair. These are good ways to try to understand the experience of those who served this nation throughout its history.

This title is a guide to the battlefields and military engagement in Pennsylvania. Obviously Gettysburg and its surrounding engagements are a big part of this book, but Pennsylvania saw conflict in the French and Indian War, Revolutionary War, and the War of 1812, as well as a several smaller conflicts. Is there a better way to honor our veterans then to visit a battlefield, memorial, or museum? Crytzer’s book is a good background of the places and sites to visit.

There is an excellent podcast by Crytzer that had a series related to this book.

The Pennsylvania Militia by Samuel Newland

While this book is a rather academic history, it does tell the story of the earliest of Pennsylvania’s Citizen Soldiers and the predecessors to the modern National Guard. Pennsylvania was somewhat late in forming military units to defend the Commonwealth (we were founded by Quakers), Pennsylvania still has a proud military tradition. Newland’s book covers up through the end of Civil War.

Cress is three books into a four book series on veterans of World War II from around the region. He tells of their experiences serving abroad and at home. Cress is the author of a number of books focusing on local history (mainly Cumberland County) and a reporter for the Carlisle Sentential. A fourth book in the series is expected.

Enjoy your holiday, but remember the reason for the holiday. Thank you to all who have served and continue to serve in our Armed Forces.